3月 19, 2016
His nails broke, and blood went all over on the rainy night yesterday. He was chased by another dog and thus run away from him. Thus he broke his nails.
We took him to doc at 10 pm, fortunately he helped us out. Kk was so hurt when he had to be pulled off his nails. I won't forget his expression and his crying under the dog mask.
Now he has to wear a rainboot made of plastic bag for a week. And it's gonna rain for an entire week from now. 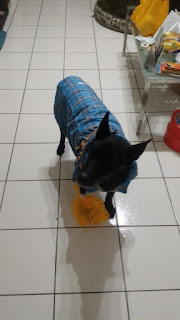