My type (1) questions on my design of the experiment

I got some problems for my experiment design. I am not sure if this belongs to t-test or something else.
I am still learning statics from udacity https://www.udacity.com/course/statistics--st095
I wish to be familiar with these methods
My questions can be classified into two types:  technical and methodological
Let me describe my technical problems first.
There're four of them in total.
On Thursday you mentioned the way we use to make ROI map in powerpoint/ keynote
But I found that our monitor is wide-screen with different ratio (16:9 or 16:10)
If we export the ppt file to PDF, the background (and the foreground pics )would be in different ration.
We should decide the ratio of the ppt before we export it to PDF.
I suppose we shall fix it to 4:3 ? Even if ti's exported to PDF and display on a wide-screen monitor like iMac, it will remain the ration 4:3 instead of being stretched.
Since we need to do color indexing, the color of the background shall be taken into account.
(I just knew this on this Thursday. )
But I guess it's ok to assign the background a color number since What we're interested in are only the ROIs.
To make the background color not white is quite important, this will make the reader blink less or read better on the monitor.
So I think I would keep the background, is that ok, prof. Tsai?
Finally for the ROIs:
I am looking for the parsing pattern change in the help of mnemonic devices in sentences. I suppose the readers will find that the main idea in each sentence lies after the verb, the so called "depiction part" of a sentence. These m-devices are there to help them figure this out.
I assume they will speed up after a few pages of training. They will go directly to the red underline parts of the sentences, which are located at the rear part of sentences (after the main verbs).
If we put ROIs on the main verbs, can we detect their eye movement to the rear part of main verbs?
What shall I do to do such detection?
As for the additional elements:
I am not sure if the bar at the bottom of the pic will effect the reader. Maybe I should remove it, or just let the reader know that there's an unimportant bar so they won't look at it at all. The pictures are captured from my cellphone (as an E-reader) so it has a bar there.
I found you notice Zuzana's page number at the bottom right. So I think I might have the same issue.
As for another type of methodologically problems:
I think I would wrote another letter since this one is long enough~
Noted,
Howard
--
吳浩民 Howard Wu
政治大學英語教學所  102551020@nccu.edu.tw
我的部落格  http://fall-cicada.blogspot.tw/
我的英語教學論壇 http://kmimayo.no-ip.org/ 和 https://www.facebook.com/windabc
您可以透過 https://db.tt/XtqMCbI  加入dropbox
我是Ptt以下三個板的板主，歡迎跟我討論這些話題
Battery, Browsers, Scenarist
或是有關Linux、自由軟體、電動車、英語教學、語言學、哲學、西洋文學
於 12月 12, 2015 沒有留言: 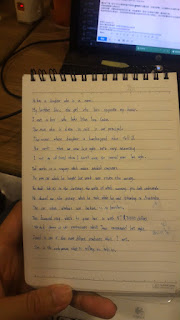